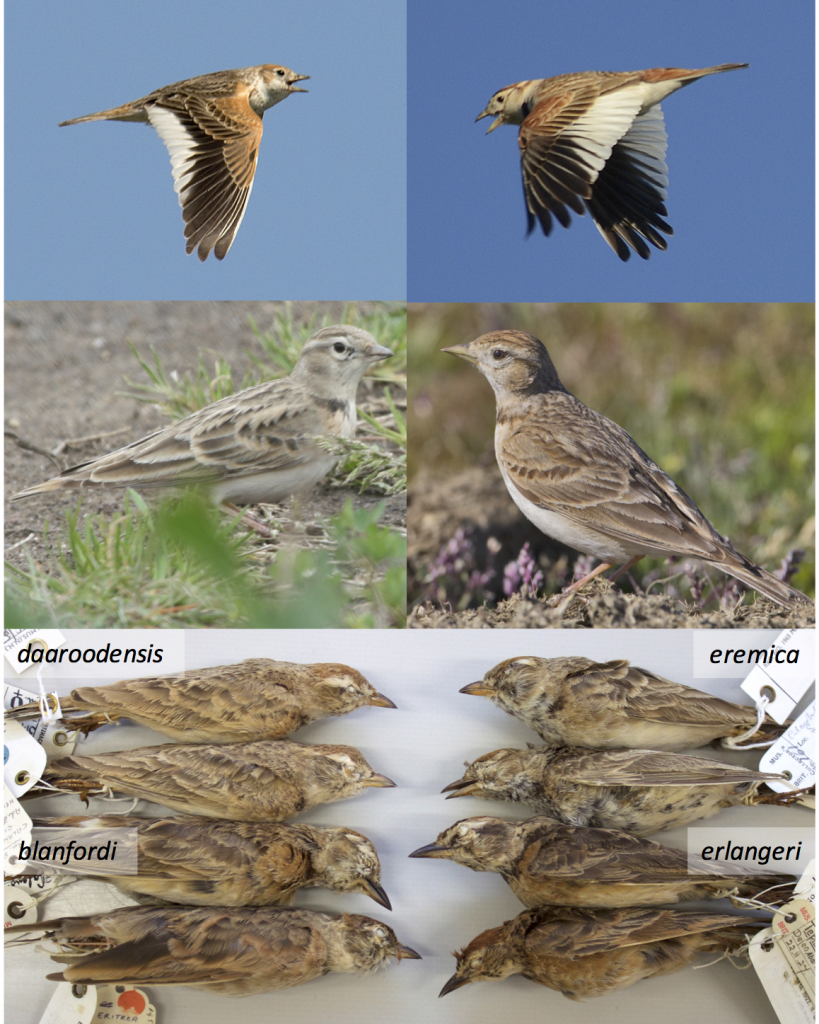 My curiosity dates back to the early 2000’s, when a small and isolated population of Red-capped Larks C. cinerea was rediscovered close to the Nigerian research institute APLORI, where I have been teaching. The Jos plateau, in central Nigeria, is a curious distribution outlier for this species, which is common in Southern Africa, but has its otherwise most northerly distribution in Congo – over 1,000 km away. Furthermore, the Nigerian birds were beautifully russet, including an unbroken breast-band (Figure 2), which led us to speculate about how long it might have been isolated from other Red-capped Larks. After the capture of a couple of individuals, I started investigating the phylogenetics of Red-capped Larks as a minor side-project. As many other minor side-projects, it grew … In our recent paper, we cover no less than all Calandrella species – distributed in Africa, Europe, and Asia – and 21 of 22 recognized subspecies (Figure 3). 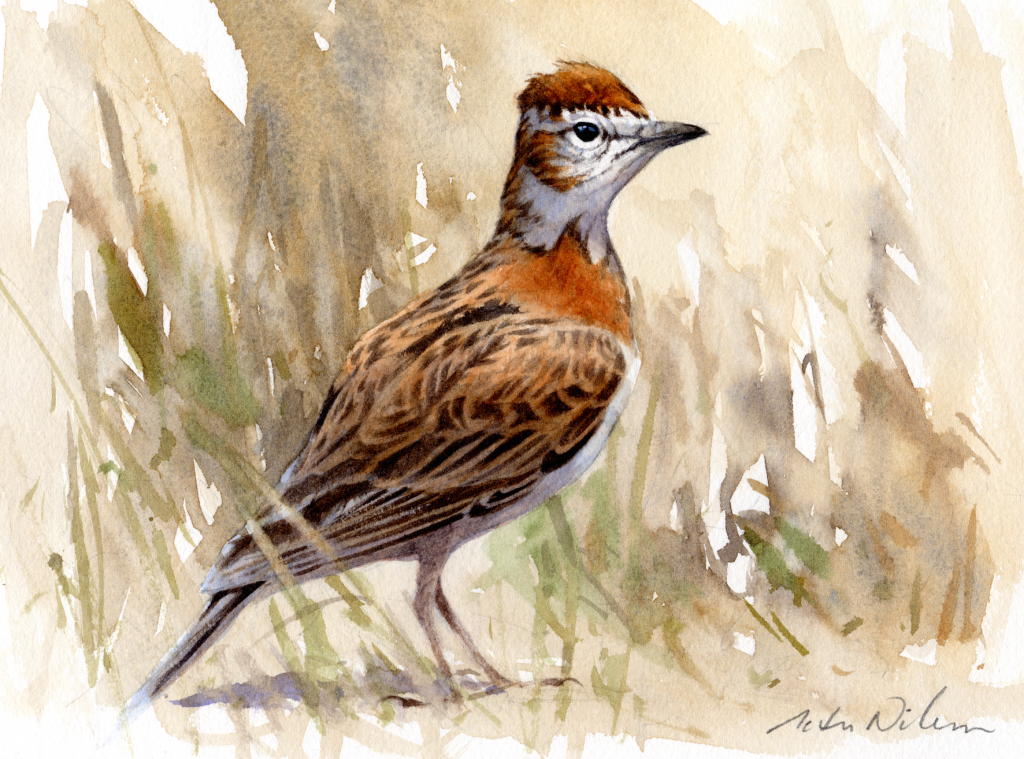 Figure 2. Watercolour of the Nigerian taxon by Peter Nilsson.

Again, it turns out that larks hold many surprises. Let’s start with the Red-capped Larks on the Jos Plateau, which sparked the whole study. The Red-capped Larks are described with multiple subspecies across Southern Africa. Genetically, however, it turns out that the southern population is panmictic, i.e. there is no population structure and no support for division into subspecies. However, the most northeastern and the most northwestern populations are an exception. In southern Kenya and northern Tanzania, the subspecies williamsi is genetically distinct, and so are the Nigerian birds (previously believed to belong to subspecies saturatior). In fact, the Nigerian and the Kenyan/Tanzanian populations are sisters, that split from each other about 800,000 years ago, and are now separated by 3,000 km. Their ancestor, in turn, diverged from all the southern Red-capped Larks about 2.7 million years ago. 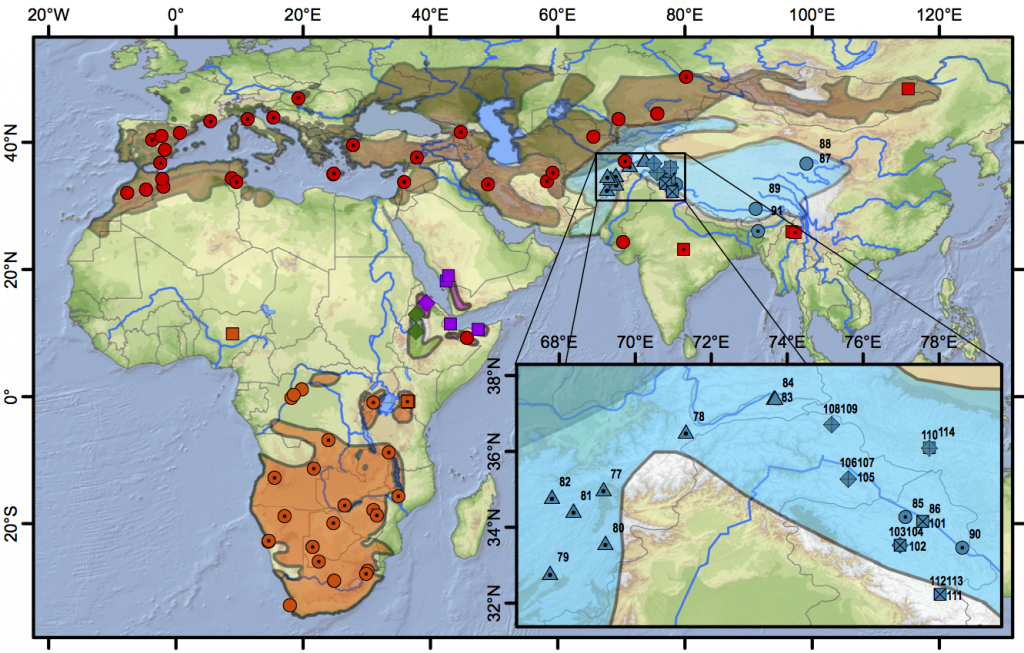 Moving on to the Horn of Africa, there are two currently recognized species: the Erlanger’s Lark C. erlangeri and the Blanford’s Lark C. blanfordi, the former monotypic and the latter divided into three subspecies with non-overlapping distributions. The genetic history, however, gives a quite different picture. The Eritrean nominate subspecies of Blanford’s Lark is indeed closely related to the Ethiopian Erlanger’s Lark. Their common ancestor diverged from the common ancestor of the two other subspecies of Blanford’s Lark (Somalian daaroodensis and south Arabian eremica) already about 4.3 million years ago! In fact, when revisiting the morphology of this group of larks, this makes perfect sense – see the lower panel of Figure 1.

The Greater Short-toed Lark C. brachydactyla has a widespread distribution from Northwest Africa through Europe to East Asia. It is described with a multitude of subspecies – some supposedly occurring in very limited areas. Again, the genetics shows a different picture. There is a shallow divide between a western and an eastern clade, the roughly comprising Northwest African–European and Middle-eastern–West Asian populations, respectively. However, we sequenced two birds on Crete, of which one turned out to belong to the western clade, and the other to the eastern. We could also confirm the results of Alström et al. (2013), showing that the easternmost subspecies dukhunensis is indeed not even a Greater Short-toed Lark, but a separate species that is more closely related to the Hume’s Short-toed Lark C. acutirostris! The Hume’s Short-toed Lark is a chapter of its own, which requires further investigation, owing to its complex relationships. The species, currently described with two subspecies, comprises no less than four distinct genetic clades, separated for 1.4–2.5 million years. Two of the clades co-occur in the Kashmir area.

Our study is based on sequencing of the mitochondrial marker cytochrome b in live individuals (by taking a blood or feather sample) as well as museum specimens from several different museums. This is a perfect example of how museum collections are essential. Indeed, there are several areas which are too unsafe to perform any fieldwork in right now, but where specimens have previously been collected to museums. Furthermore, when revealing this kind of unexpected relationships, it is imperative to be able to access type specimens – the template individuals that are used to describe a species or subspecies, before drawing any conclusions about taxonomic implications. 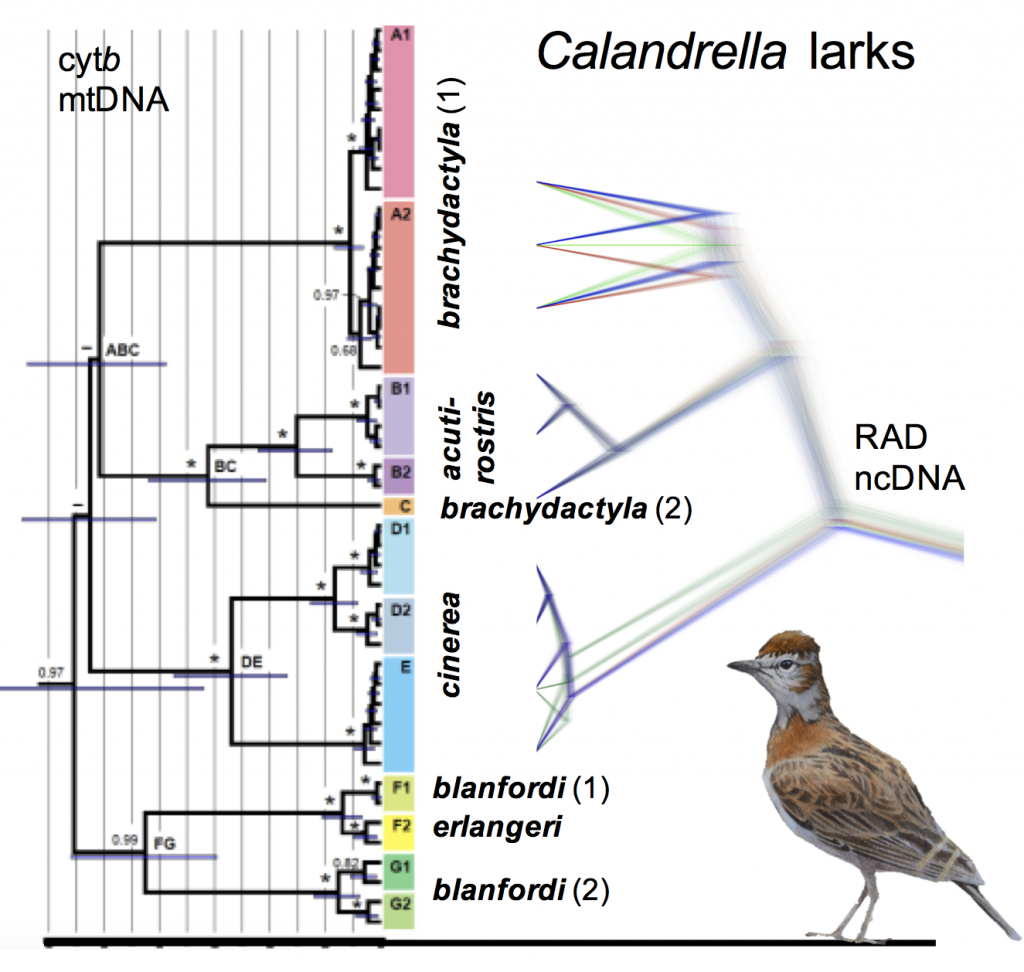 Figure 4. A condensed summary of the phylogenetic results, with the cytochrome b tree to the left, and one version of the RAD sequencing based species tree to the right. For full details, see the trees in our paper!

Using only a mitochondrial marker can, for several reasons, be problematic. In addition, we therefore applied RAD (Restriction site Associated DNA) sequencing – a method where thousands of genetic markers, spread across the genome, are sequenced. We used this for a subset of individuals, representing all major clades of the mitochondrial phylogeny. The results corroborated the mitochondrial phylogeny, and furthermore we made an important methodological discovery. Contrary to the statement of the authors of SNAPP, a program for coalescence-based analyses of single nucleotide polymorphism (SNP) data, it is essential to include an outgroup for the correct placement of the root of the phylogenetic tree.

As evident from the above, there is reason to revise the taxonomy of the Calandrella larks. We intend to revisit this subject shortly, with the formal description of the new Nigerian taxon, and presentation of morphological data across the genus.